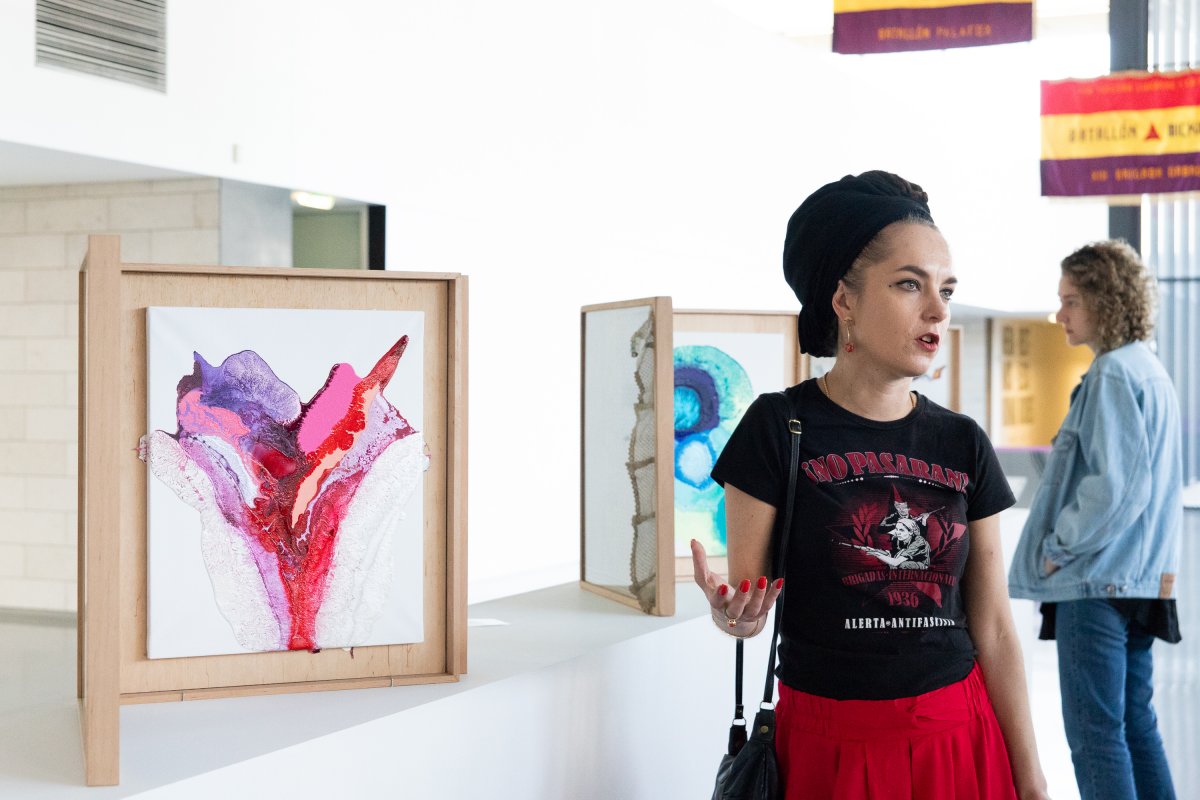 On Friday, April 29, the exhibition Difficult Pasts. Connected Worlds dedicated to the painful histories of Eastern European countries was opened at the National Gallery of Art in Vilnius. The opening program of the exhibition also featured performances by artists Zuzanna Hertzberg and Laima Kreivytė, Arminas Bižys, Simonas Kaupinis and Vladas Urbanavičius, as well as a guided tour with the participating artists of the exhibition. Also, during the course of the exhibition, a wide public program will take place, within the framework of which the artists involved in the exhibition will lead workshops, discussions and performances.

During the exhibition opening, Difficult Present. 65 Days (saxophone, tube, gas pipe) was performed by Laima Kreivytė, Arminas Bižys, Simonas Kaupinis and Vladas Urbanavičius. The score is a sonic diary of the war in Ukraine, where wind instruments combine breath and metal, with every day of the war marked by the sound of a gas pipe. The echoing object is welded from the remains of the gas pipe used for the sculpture The Embankment Arch—the most debated public artwork in the history of independent Lithuania.

Audio recording of the performance:

Performance by Zuzanna Hertzberg & guided tour by the artists of the exhibition
30.04.2022.

On Saturday, April 30, the Polish artist Zuzanna Hertzberg held a spoken word performance to accompany her artwork Volunteers for Freedom. This work restores the memory of Jewish Polish and Jewish Latvian women who fought in the International Brigades in support of its Republican government against General Franco’s troops during the Spanish Civil War (1936–39).

The work is comprised of boxes that unfold, chosen, according to the artist, as they resemble “a space where certain family stories are kept.” Hertzberg explained that “each box is devoted to a particular woman and consists of an affective portrait and a collage created with elements from her biography. The stories of women are very diverse and therefore they become a universal story of female fighters against a military coup who fought under the slogan: For Your Freedom and Ours.” The performance is based on the archives, autobiographies and memories of the protagonists of her work.

On Friday, June 17, the artists Lia Dostlieva and Andrii Dostliev (Ukraine/Poland) held a workshop Is This Colonial?  for youth and adults. The workshop focused on the different ways of dissemination of colonial narratives. Can culture be instrumentalized and used as a vehicle for implementing colonial views? Is it possible to use dishes from national cuisine as a tool of cultural superiority? Can a set of visual choices made by a photographer be understood as a colonial gaze? Together with the participants, the artists discussed different visual cases from surroundings (screenshots from media outlets, sculptures in urban space, etc) and from Dostlievs' work with archives in order to find answers to those questions - or to pose other, even more complicated ones.

On Thursday, August 18, 4.00 - 8.00 pm, the Finnish artist Jaana Kokko will hold a workshop for youth and adults Identities of the place. The workshop focuses on understanding the power relations in making the moving image, particularly the so-called documentaries. In our case, we will concentrate on the questions concerning the locality and the changing identities of the place and land. Also, we will examine how to approach whoever is living and dying in it. How do we work with the locality of the place and space? What does it mean to connect it with the histories that were silenced? How do we encounter the living?

Jaana Kokko is a Helsinki-based visual artist with a background in arts and economics. She works primarily with video, but also in photography, text, and drawing. Her works revolve around the subjects of language, representation, and alienation and are seen through the eye of a feminist. In her practice Kokko often explores ‘polylogs’, using dialogue she shows how our world consists of different individuals and their interpretations of reality in their historical context. She has been lecturing and teaching regularly at the universities, recently at the Academy of Fine Arts, Helsinki, and Academy of Fine Arts, Nürnberg. Jaana Kokko’s work is currently on display in the exhibition "Difficult Pasts. Connected Worlds" (29. 04. - 28. 08. 2022, National Gallery of Art, Vilnius).

The workshop will be held in English. The event is free of charge. Registration by e-mail: edukacija@ndg.lt
Image: Jaana Kokko. A still from the film “Roma Mountain (Porridge Hill)”, 38 min, stereo, 2022.